Posted by medievalotaku on April 22, 2016
Posted in: Uncategorized. Leave a comment

There aren’t enough Nazis to go around. People try to fill in with Klansmen, but it’s not the same. Lately it just seems like there’s never a hater around when you need one. So here’s the deal:

From now on, anyone who objects to letting men use the women’s room is a Nazi. He’s not uninformed, or wrong, or old. He’s evil on two legs. He is … a Nazi! At one stroke this makes about about a hundred million people Nazis.

This is America. If we need Nazis, we make Nazis, even if it means making them up. Now we just need to figure out how to make them wear the uniform.

Posted by medievalotaku on April 18, 2016
Posted in: Uncategorized. Leave a comment

It’s that time of year. Those of us who wait until the last minute are rushing to get tax returns filed (or extensions submitted).

So it’s also a good time to remind ourselves that there is a better way.

Economists look at the tax system and focus on the warts that undermine growth.

Other people focus on the immorality of the tax code.

Most of these problems have existed for decades and are familiar to people who have the misfortune of working for tax reform.

Humanism and the Herd Mentality

Posted by medievalotaku on April 11, 2016
Posted in: Uncategorized. Leave a comment

Heros von Borcke holds little interest to students of the Civil War today, judging from the books being written, names dropped in conversation, and that I did not know of his existence until three years ago.  Despite being practically ignored by most, this man was the favorite adjutant of General Jeb Stuart and received a special commendation from the Confederate States’ government after suffering his nearly fatal wound following the Confederate victory at Chancellorsville in 1863.  He was also at General Stuart’s side when this great general perished from the revolver shot he received at the Battle of Yellow Tavern.  His memoirs of the Civil War, Memoirs of the Southern War for Independence, make for great reading.  He loved his service for the South so much that he would often fly the Confederate Battle Flag from his castle in Prussia.  Would that not be a sight to see in Germany!

Many of our dear readers are likely astounded by the phrase “his castle in Prussia.” Von Borcke, who would eventually become known as “Von” to Stuart, “the giant in grey” to the general public, and “Major Armstrong” to the enlisted men, came from aristocratic stock.  Around the beginning of 1862, he took leave of the 2nd Brandenburg Regiment of Dragoons and arrived in the South on a blockade runner in May, carrying with him an arsenal of a shotgun, four revolvers, and a broadsword boasting a 36 inch blade.  (Now held in Richmond’s Museum of the Confederacy.) Jefferson Davis, when he saw the size of von Borcke’s sword and the size of von Borcke (Depending on who tells it, between 6′ 2″ and 6′ 4″ tall and between 240 and 300 lbs), said that with such a sword wielded by such a strong arm, he had nothing to worry about.  Von Borcke would get to know Generals Jackson and Stuart quite well and give great service until his wound took him off the battlefield for the rest of the war.  Complications from this wound would eventually cause his demise in 1895 at the age of 59.

END_OF_DOCUMENT_TOKEN_TO_BE_REPLACED

Posted by medievalotaku on April 8, 2016
Posted in: Uncategorized. Leave a comment

Senator Bernie Sanders wants to dramatically increase the burden of government and he claims that his policies won’t lead to economic misery because nations such as Sweden show that you can be a prosperous country with a big welfare state. 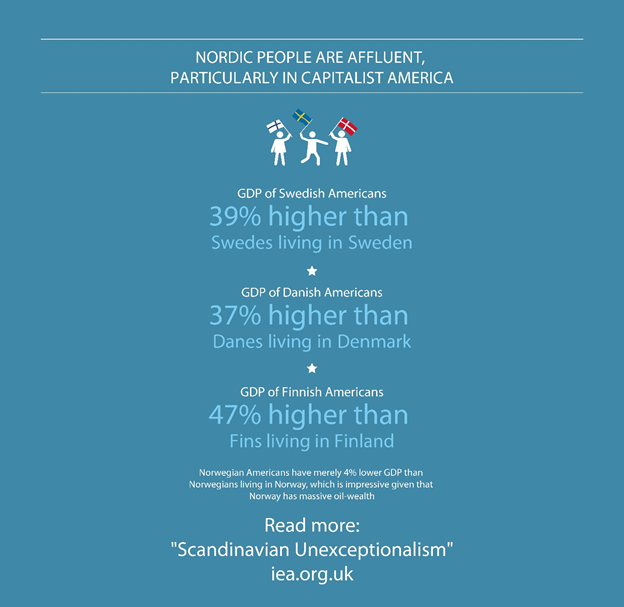 Perhaps, but there are degrees of prosperity. And a large public sector imposes a non-trivial burden on Nordic nations, resulting in living standards that lag U.S. levels according to OECD data.

Moreover, according to research by a Swedish economist, people of Scandinavian descent in America produce and earn much more than their counterparts at home.

That’s not exactly a ringing endorsement of the Nordic Model.

But there actually are some things we can learn from places such as Sweden. And not just things to avoid.

As Johan Norberg explains in this short video (you may have to double-click and watch it on the YouTube site), there are some…

I’m writing the present post to help my group of friends’ discussion of Barbara Tuchman’s The March of Folly.  The book examines why governments pursue policies contrary to their self-interest.  Tuchman’s first chapter covers a wealth of examples from the Fall of Troy to the Second World War.  Her three parameters for selecting examples of political folly are the following: “it must be perceived as counterproductive in its own time, not merely by hindsight” (5); “a feasible alternative of action must have been available” (ibid.); and lastly, “the policy in question must be that of a group, not an individual ruler, and should persist beyond one political lifetime” (ibid.).  These seem wise parameters; however, Tuchman includes two loci classici in order to form the discussion: the revolt of Israel from Judea caused by Solomon’s son Rehoboam threatening to increase the burdens on the people and the story of the Trojan Horse.

The main periods studied by the book are on the Fall of Troy, the misrule of the papacy prior to the Reformation, the American Revolution, and the Vietnam war.  The odd thing about these choices is how perspicacious her knowledge is on the two World Wars.  In chapter one, she delves deeply into the political debates within the German government of WWI and the Japanese government of WWII, which led to the entrance of the United States into these global conflicts–both times ensuring the defeat of these countries.